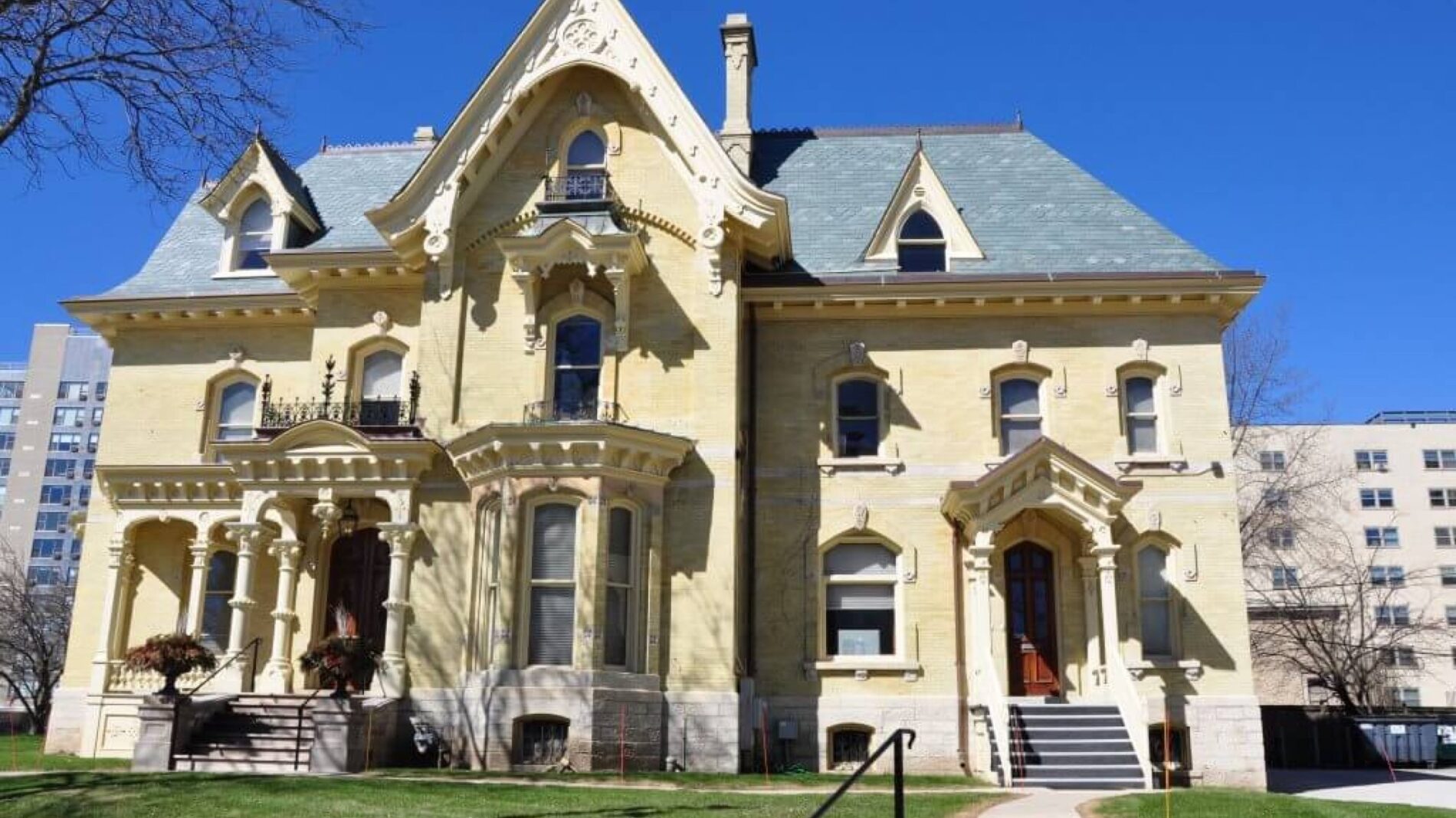 Originally built in 1874, the Judge Jason Downer mansion, was designed by esteemed Milwaukee architect, Edward Townsend Mix whose work also includes the historic Mackie Building, Thomas Cook House and Mitchell Building. Judge Downer was one of the founders and an early editor of the Milwaukee Sentinel and also served as a Milwaukee Circuit Judge in the 1840s and on the Wisconsin Supreme Court from 1864 – 1867.

Constructed of cream brick, a signature product of Milwaukee, the home also boasted cut-limestone and intricate decorative molding and millwork throughout. The building has gone through an extensive renovation, thanks to H. Russell Zimmermann, and is now home to the Milwaukee Art Museum Research Center’s art library, archives and related programs doubling the museum’s library space.

H. Russell Zimmerman has made a habit of visiting, restoring and documenting historical buildings and houses in the Milwaukee area, sometimes collecting artifacts, wood carvings, ornaments or chandeliers. In the 1960s, as a young architect, Zimmermann visited Judge Jason Downer’s Home and snapped a photo from the outside. Just few years later, the Historic American Buildings Survey would pronounce the building “one of the finest specimens of Victorian Gothic architecture in the city of Milwaukee.”

“I didn’t realize then just how significant that photo would become,” said H. Russell Zimmermann, architect. “How would I have known in 1963 that those slides I took would be important documents now?”

More than 40 years later, Zimmermann, now a distinguished architectural historian, was asked to take on the Downer home restoration project to prepare for its new tenants, the Milwaukee Art Museum Research Center. He knew he had quite the task in front of him.

“The house was filthy because coal was used to warm every building and house in the city during that time,” said Zimmermann. “The Downer house was almost black, a dark gray really.”  The former owner painted over the Cream City brick, coal residue and all, resulting in a lengthy process to remove both the remnants from the smoke and lead paint, all of which were disposed of responsibly.

The house is half a block from Lake Michigan, so when the wind blows from the east, it blows over hundreds of miles of water, accumulating moisture before slamming into Milwaukee. And if the weather is cold enough for snow, that spells even more trouble for any building to maintain its integrity over time.

The building once had a porch, and Zimmermann was determined to restore it to its former glory. If it wasn’t for a stereo card photograph that showed what the porch once looked like, he would have been completely lost. Zimmermann felt strongly about the restoration of the home’s porch and was committed to building a permanent and long-lasting structure moving forward.

“I was interested in Accoya® because I had never heard of anything like it before,” said Zimmermann. “As someone with a passion for chemistry, I was interested in its acetylation process. I learned that Accoya® had been used as liners in canals in the Netherlands, and after ten years they pulled out the Accoya® wood liners and there were no signs of degradation or insect damage. It’s a softwood that through the acetylation process becomes more durable, and as the wood is modified through to the core it’s not going to deteriorate. It’s a miracle product, no doubt.”

Zimmermann chose Accoya® wood for the porch posts, arches, post railings and capitals because it could stand up to the varying climate changes so well-known for in the upper Midwest. All the pieces are finished in a cream-colored paint.

“I joked towards the end of the project that the house will fall down before the porch does,” said Zimmermann, as a testament to the product’s longevity. “Accoya® wood really is a remarkable product and I will definitely use it again.”

The Milwaukee Art Museum houses more than 30,000 works of art and is on par with the Frick and the Guggenheim art research libraries. It includes reading rooms, study spaces and a lecture space. 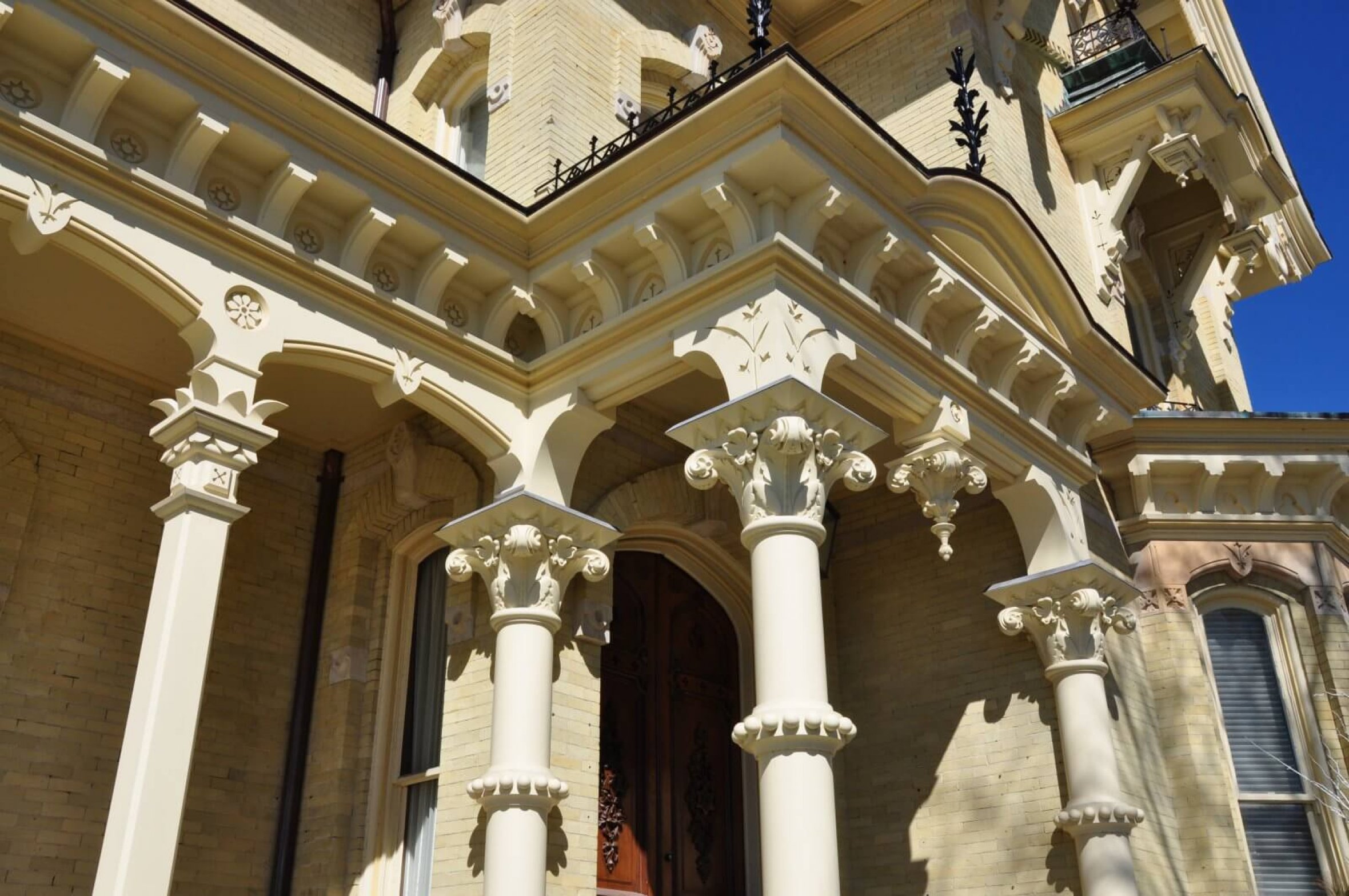